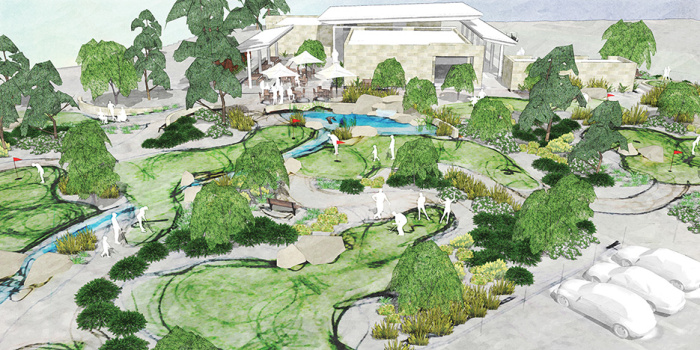 Belgravia Leisure, which runs the Melville-council owned golf course, has an application in with the WA Planning Commission to build the putt putt on 4000sqm near the current clubrooms.

Golf course manager Clarke Osborne told the Herald nine of the holes would be specifically designed to cater for people with disabilities, so they could take their wheelchairs along for a game.

“At any one time we can have 72 people playing the course,” Mr Osborne said.

“We intend to add an outside alfresco area in an unused space that can be used for families, functions and the general public playing the golf course.”

“The plan is to create an asset for the local community that will make a significant contribution to recreation and leisure and local culture at Point Walter and continue to activate the site–miniature golf appeals to and is enjoyed by people of all ages and abilities,” he said.

The project has been more than four years in the making, with the WAPC putting Belgravia under the microscope to ensure it doesn’t detract from the A-Class reserve.

Mr Osborne said all existing native trees will be preserved, while others are being planted to create a leafy, shady experience.

“The design has a landscape focus using local water-sensitive planting that seeks to preserve any remnant trees and maximise biodiversity and habitat creation while being appropriate to the site,” he said.

Because of the low impact on neighbouring properties, the plan hasn’t required public consultation, which led to some consternation for locals when it turned up as a confidential “development” item at the last Melville council meeting.

Former Melville councillor Susanne Taylor-Rees, whose home backs onto the golf course, feared plans for a mobile phone tower had been revived and was ready to quit all her committees for another bruising battle.

Her relief to hear it was just putt-putt was palpable.

“Thank goodness–that’s an appropriate use for the site and would be a great thing for bringing in families,” Ms Taylor-Rees said.